Buy or order a new task

1. A circular disc of glass (σ = 2,2) is 3 mm thick. It has a diameter of 50 mm and a uniform layer of cork (σ = 0,15) covers one face. Find the minimum thickness of the cork layer, which will prevent the disc from sinking in water. If the cork thickness is increased to 10 mm, how much cork will protrude above the water surface.

2. Determine the position adopted by a square slab of material of relative density 0,9, when floating completely immersed in a vessel containing two liquids, which do not mix and whose relative densities are 1,2 and 0,8.

3. A hollow cylinder with closed ends is 300 mm in diameter, 450 mm high, has a mass of 27 kg and has a small hole in the bottom. With its axial vertical, it is lowered slowly into water, and then released. Calculate

a. The gauge pressure of the air inside it

b. The height to which the water will rise within it

c. The depth to which it will sink

Disregard the effect of the thickness of the cylinder wall but assume that it is uniform and that the compression of the air inside is isothermal.

4. A rigid spherical balloon of diameter 800 mm, which is filled with helium, has carried meteorological instruments to a height of 6000 m above sea level. The mass of the balloon envelope is 0,1 kg and the mass of the instruments, whose volume may be considered negligible, is 0.06 kg. Assume that the balloon did not expand during its ascent, that atmospheric temperature decreases with increasing altitude at a uniform rate of 0,0065 K/m and that the temperature at sea level is 15ºC. Determine from first principles, the mass of helium in the balloon.

5. Figure 1 shows a section through a rectangular gate of height 5a and width a, which seals a hole of the same size and shape in a vertical partition in a tank. The gate is pivoted about a horizontal axis through O. The tank contains liquid of density ρ; on the left-hand side, its free surface is at a height c above the pivot (c > 3a); on the right-hand side, the free surface is level with the pivot. Both surfaces are exposed to atmospheric pressure. Working from first principles, derive expressions for the force on the gate and the moment exerted about the pivot. 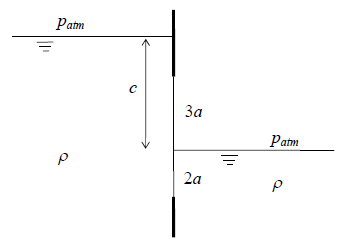 6. The gate, formed from two rectangular elements, which are rigidly joined to each other and hinged in O as shown in figure 2, will open automatically, when the liquid level h reaches a given value. Show that this occurs when h > b. 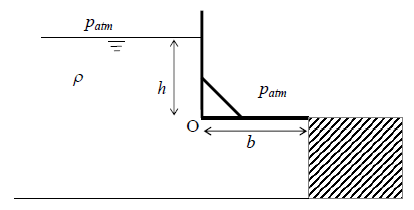 7. A circular gate of radius a in the vertical wall of a tank is hinged about a horizontal axis through its centre. The free surface of the liquid in the tank is a distance s above the gate centre (s > a) and both the free surface and the other side of the gate are exposed to atmospheric pressure. Derive expressions for the force on the gate and the moment exerted about the hinge and show that the moment is independent of the liquid depth.

9. An object weight 10 N in air and 8 N when immersed in water. Determine its relative density.

1. Figure 1 shows the longitudinal section of a wind tunnel, which draws air from a laboratory, where the pressure is atmospheric (there is not gauze or screen at the entrance to this tunnel). When the speed in the working section is at the maximum of 35 m/s, calculate the gauge pressures in the working section and at the entrance to the contraction, AA. If slope reservoir manometers containing alcohol and with slope arcsin (0,1) are used to measure these gauge pressures, calculate their readings.

2. Figure 2 shows arrangements made for recording the pressure distribution on a horizontal circular cylinder in the wind tunnel of figure 1. The cylinder spans the tunnel from wall to wall. A lead from a static pressure hole in the surface of the cylinder is led along the inside of the cylinder and out through the vertical wall of the working section. It is attached to the limb of a vertical water-filled reservoir manometer, the reservoir being open to the atmospheric pressure. A static pressure hole in the wall of the tunnel working section is attached to the reservoir manometer in the same way and records a constant reading sw = + 20 mm of water. The cylinder can be rotated about its axis so that the static pressure can be recorded at various positions, starting from the tunnel centre line where θ = 0. The following table gives values of the manometer readings, s, measured in mm of water for a range of values of θ. Plot the distribution of pressure coefficient on one side of the cylinder in the range 0 < θ < 180 . Find also the wind tunnel speed and the dynamic pressure in the working section. 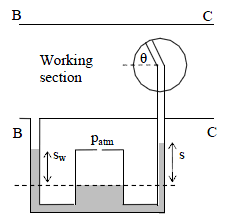 4. Two-dimensional flow takes place between two parallel solid plane boundaries a distance 2a apart. The velocity distribution in the flow is described by the equation

so that U is the maximum velocity on the centerline and the velocity is zero at each boundary (y = ± a ). Show that the mean velocity in the flow is Ū = 2U/3 .

A very large reservoir of pressurized air feeds a contraction and forms a free jet of air of circular cross section and diameter 60 cm in a laboratory, where the ambient pressure is atmospheric. A Pitot static tube is arranged in the jet and attached to a vertical U-tube manometer containing alcohol. If the difference in levels recorded by the manometer is 65 mm, find the air speed.

The Pitot static tube is removed and replaced by a small body, which is equipped with static pressure holes in its surface. If the minimum gauge pressure recorded on the body is found to be – 310 Pa, find the maximum velocity on the body.

State the values of pressure coefficient on the body (i) at the stagnation point, and (ii) at a point where the velocity achieves a value 50% above the value in the jet.

6. A sharp-edged orifice 50 mm in diameter is used to measure the flow of air into an engine in the arrangement shown in figure 3. If the pressure difference across the orifice is measured by an alcohol manometer set at a slope arsin (0,1), calculate the volume flow rate of air when the manometer reading is 271 mm. The coefficient of discharge for the orifice is 0,62. 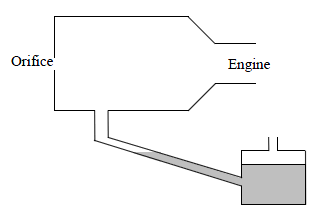 Buy or order a new task

Запись опубликована в рубрике Гидравлика, Задачи с метками calculate the volume flow rate of air when the manometer reading is 271 mm, Find the minimum thickness of the cork layer, What is the gauge pressure at the stagnation point on the model. Добавьте в закладки постоянную ссылку.